Bowser Tells Story of George Washington His Own Way, 1918 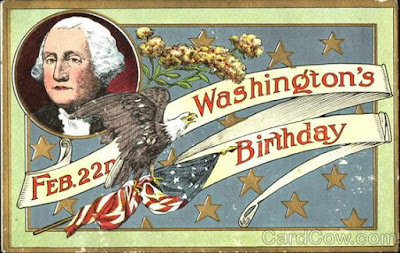 “Bowser on Washington; He Writes An Essay and Mrs. Bowser Likes It,” from the Jackson County Journal, Sylva, N.C., Feb. 14, 1918. President’s Day is celebrated Monday, February 19, this year, but we used to celebrate Washington’s birthday, Feb. 22, and Lincoln’s birthday, Feb. 12.

For three evenings Mr. Bowser had come up from dinner to go straight into the library and lock the door and pass a couple of hours. Mrs. Bowser had not questioned his rather strange behavior, but had contented herself with putting her ear to the door now and then to find out that he had not died of heart disease and fallen out of his chair. She heard his pen scratching over paper and him muttering to himself, and she was contented to wait her time.

It came on the third evening. After an hour’s seclusion he came out, a look of satisfaction on his face, and observed:

“I am now ready to tell you what I have been doing. There is a club here in the city called ‘The Washington Dodos’. A man named Philbrick, whom I know, is going to join. It is a rule of the club that everyone who joins shall deliver an essay on George Washington. Philbrick is no hand at the pen, and he came to me the other day and offered me fifty dollars if I would write him an essay. I thought I would give you the fifty dollars.

“I have just finished it and am going to read it and ask your opinion. I commence by saying:

“George Washington was a fine boy. He obeyed everything his father and mother told him to. He never tore his little trousers; he never lost his little cap; he never made faces at his father’s hired hand. He never climbed trees, and snapped the buttons off his clothes. He rolled on the grace once in a while, as boys will, but he always rolled very gently, and he didn’t even muss up his hair, nor get grasshoppers in his little hind pockets.”

“How is that for a beginning, Mrs. Bowser?”

“Why—why,” she answered, “you have gone back farther than any historian.”

“I intend to,” he smile din a sort of superior way. “Here is some more of it:

“As a boy, George Washington never had the colic. He dodged the measles and the whooping cough. He was kind to all living animals, and, if he found a crow with a broken wing, he brought it home and nursed it until well. All the crows for fifty miles around got to love him, and they would call out his name whenever they caught sight of him.”

“Well, Mrs. Bowser, is it getting interesting to you?” was asked.

“You have certainly struck some things which will astonish the hearer,” she answered with her hand over her mouth. “Where did you get all these facts from?”

“We will not mind that, my dear. Philbrick wanted something original and I think I have given it to him. We will now go ahead again.

“It is said that little George never told a lie. This is a mistake. He told three or four every day, and some awful whoppers, but he lied as gently as he could, and there was no sin in his heart when he lied. His father had a favorite plum tree. It was a favorite because it never bore over a dozen plums at once, and because every plum was wormy. One day a slave on his father’s plantation had his ears cuffed for some impudence, and he seized the ax and when out and cut that plum tree down for revenge. Little George saw him do it, but he was not a boy to go and blab everything out. When his old man missed the tree, and demanded to know who had cut it down, what did little George do? He spoke right up and claimed that he cut it down with his little hatchet to see if the hatchet had an edge on it. His father was going to give him the darndest licking a boy ever got, but, the fact that little George had told the truth, when he could have lied just as well as not, appealed to the parent. He took his son in his arms, and forgave him, and told him he that he would buy him a dozen more hatchets, and he could cut down every tree around the house.”

“Now, then, Mrs. Bowser, what is your opinion of that? Does it hit you or not?”

“Yes it hits me,” replied Mrs. Bowser, stooping her head under the table to laugh to herself. “Why, Mr. Bowser, you have dug up something entirely new.”

“Thank you, dear—thank you. That was my object—to get something entirely new. I go on:

“Little George was to be a great man, but his father couldn’t see any signs of it, nor did his mother expect anything. He ate his pudding and milk for supper just like other boys, and he always knelt down by his bedside and prayed before he worked his way between the sheets. Nothing occurred to show that greatness was sleeping in his character until he was sixteen years old. Then a bear killed one of his father’s sheep, and he was bemoaning the loss of the old wooly, when the son spoke up and said:

“Father, I will kill that bear for you. He has done a very wicked thing and should be punished for it.”

“But you are only a boy,” said the father.

“I know it, papa, but I feel a greatness within. Let me take your old shotgun and I will load it with a handful of peach stones and bring you back the scalp of that bear, or I will perish in attempting to do so!”

“And the father consented, and little George took the old musket out and became great in an hour. He saw the bear and discharged a load of peach stones at him, and he not only ended the life of Bruin, but killed seven sheep at the same discharge. He brought all the scalps to his father, and the overjoyed parent took him into the house and said:

“I surely have a great son in this, my little George. Keep on, my son, and you will be known of all the world.”

“Now, Mrs. Bowser,” said Mr. Bowser, as he straightened up. “This is only a small part of the essay, but you can judge by this what the whole is. Is it not an interesting paper?”

“It seems—seems to be,” she replied. “But would you call it history?”

“It is the straightest kind of history. But are you satisfied with it?”

“Of course what!” demanded Mr. Bowser. “I might have known you would find some fault about it.
What is wrong?”

“N-nothing,” she replied. “It is in some respects the greatest essay on Washington I ever heard.”

Mr. Bowser when to the telephone and called up Mr. Philbrick and told him t come to the office the next morning and get his essay. Mr. Philbrick came, but he did not take the essay away with him. Instead of that, he hurt Mr. Bowser’s feelings by calling him an old jackass, or some such name.
Mrs. Bowser has not got that fifty dollars yet, and she has no hopes that she ever will get it.