Harry Truman, Who Was Sure To Lose, Elected President, 1948

“Truman and His Vice President,” from Life magazine, Nov. 29, 1948. Harry Truman, who became president after Franklin Delano Roosevelt death, ran for election in 1948 against Thomas E. Dewey, the Republican's candidate (who had also run against Roosevelt in the previous election), and Strom Thurmond, a Dixiecrat from South Carolina. The Democratic party had gone through an ideological split which resulted in Henry Wallace of the Progressive Party, and the far-right Dixiecrats running as third-party candidates, which experts thought would make a Truman win impossible. Truman won 49.6 percent of the votes; Dewey 45.1 percent; and Thurmond 2.4 percent. 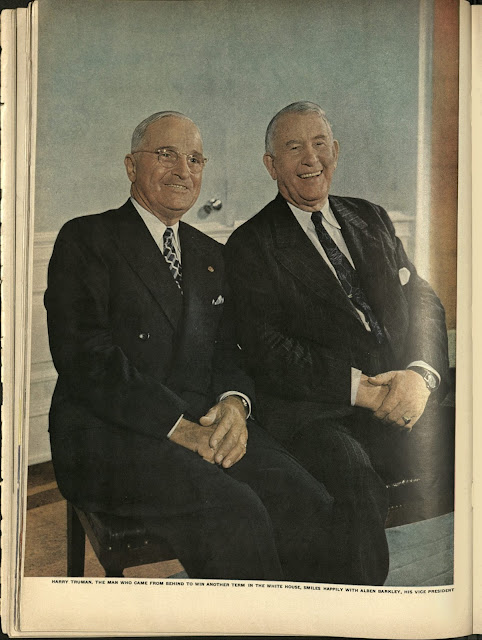 Harry Truman, the man who came from behind to win another term in the White House, smiles happily with Alben Barkley, his vice president.

The big, wide smiles shown on the opposite page symbolize something new in recent U.S. political history. Few presidents have been very chummy with their vice presidents. Roosevelt got rid of Garner after two terms, was no intimate friend of Wallace and accepted Truman as a compromise. But President Harry Truman and Vice President-elect Alben Barkley have been fast friends from the time they were both senators and members of a “ham and eggs club” which met weekly to swap stories. They seem to like the same kind of amusements, the same kind of kidding, the same Midwest jokes. This has been most evident since the election, especially during the vacation at Key West, Fla., where the old friends cavorted about together and kidded everyone in sight. When reporters asked the President if he would make news over the weekend, he replied, “I’ll go to bed at noon Saturday and won’t get up until Monday morning. When they turned to Barkley for anything newsworthy he could offer, he replied in the same vein: “I’m not talking about anything except the blueness of the water and the hotness of the sun.

This display of happy geniality contrasts with some of the aggressive, dead serious speeches made by the President in the heat of the campaign. But Alben Barkley of Padukah, Ky., who seldom lost his amiable air even during the trying years when he had to lead a divided Democratic party in the Senate, carried on with easy conviviality all through his arduous electioneering tour. He always seemed relaxed and prepared for anything. When addressing an audience he was constantly reminded of a fellow he had heard about. “This fellow,” he would confide to the crowd, “had two promising sons, but an awful thing happened. One of those sons when to sea and the other got elected vice president. He never heard of either one of them again.”

Barkley’s friendly, drawling humor was a highly useful vote-getting device. He got votes from the farmers when he told a rural audience about a farmer he had just been talking with. “This fellow told me,” he said, “that he was living better under Hoover than he is now. Seems he had more than one chicken for every pot then; he couldn’t sell them so he ate them all.” Although in this story, he evoked the name of the last Republican to be president, Barkley almost never mentioned by name the man who was trying to be the next Republican president. Once, however, he relaxed and used the name, largely to get away with an egregious pun. Addressing a group of people in the rain in Dover, Del., he announced that he would cut his speech short. “I don’t want you to get wet,” he explained. “In fact, I don’t even want you to get Dewey.”

During the campaign Barkley was beset with misfortunes, which would make it hard for almost anyone else to keep his sense of humor. Before one speech he lost his glasses and had to address a crowd he could hardly see. On another occasion he fell downstairs in the dark and wrenched his knee.
'
At a fair in Illinois one of two steers, masquerading as a pair of 19th Century oxen, almost ate his straw hat. Then, during a plane flight, he caught cold. “The man who sat behind me had his air intake pointed right at me and it blew on the top of my head all night so I caught cold.” He made the rest of that drip by car, carrying a thermos of water which he used periodically to wash down some cold pills a druggist had recommended to him.

Still, out of his long years as a popular speechmaker, he could find a joke for any occasion. When a group of men seemed to call for a story with just a touch of salt in it, he gave them the one about the fellow who “came into a bar to get another drink, but couldn’t recall the name of it. He told the bartender that all he could remember about the drink was that it was ‘tall, cold and full of gin.’ At that point a man leaning on the bar turned on him and snarled, ‘Sir, you are speaking of the woman I love.’”

When family groups were predominant in his audience, Barkley used the old stand-by, a mother-in-law joke: “This fellow’s wife had died and somehow there was a shortage of cars at the funeral. The undertaker asked the husband of the woman who had died if he would mind riding to the funeral in the same car with his mother-in-law. So the fellow answered, ‘Well, all right, but it’ll ruin my whole day.’”

Barkley’s mood since the election seems unchanged. Because he is a widower women reporters were quick to ask who would be his official hostess. Barkley’s reply was that he hadn’t decided, but he could not resist adding impishly, “There have been several applicants.” When someone reminded him that the Republicans had been talking about a big new home for the vice president, Barkley delivered himself of the observation that “If they build a $2,500,000 house for the vice president, nobody will want to run for president.”

Although the Vice President-elect is 70, he seems to feel as full of energy as he did 35 years ago when he began his career in Washington as a congressman. After the election a reporter told him that Present Truman’s aids had said the President did not contemplate running for another term. Did Barkley plan to retire in 1952? Barkley hitched himself over in his chair and answered in true Barklean style, “Well,” he said, “that reminds me of when Tom Heflin went back to Alabama to see about running something. When he got back to the Senate cloakroom colleagues asked if he were going to run. Heflin replied, “You can’t resist the clamorment of the people.’” 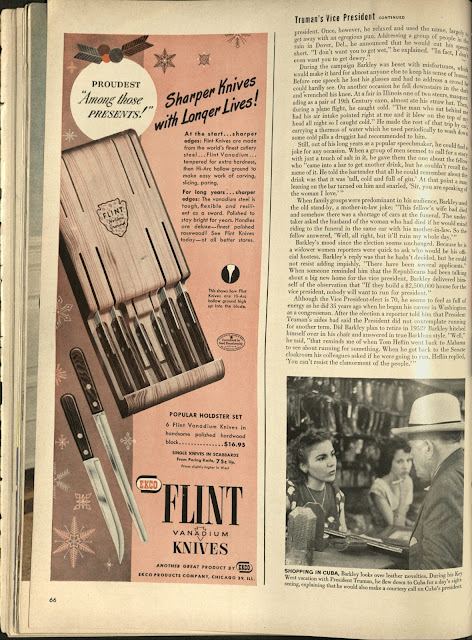 Shopping in Cuba, Barkley looks over leather novelties. During his Key West vacation with President Truman, he flew down to Cuba for a day’s sight-seeing, explaining that he would also make a courtesy call on Cuba’s president.