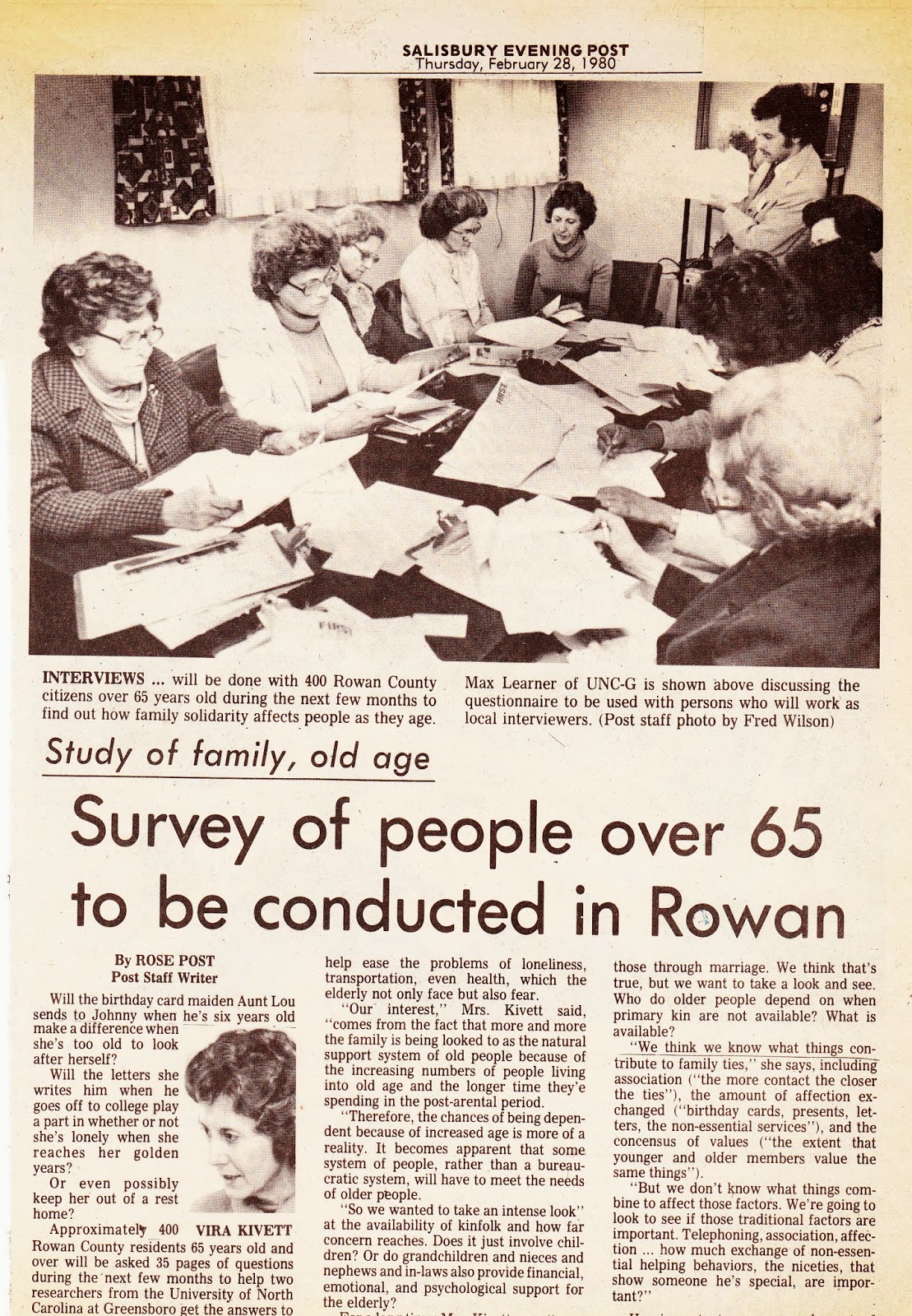 INTERVIEWS will be done with 400 Rowan County citizens over 65 years old during the next few months to find out how family solidarity affects people as they age. Max Learner of UNC-G is shown above discussing the questionnaire to be used with persons who will work as local interviewers. (Post staff photo by Fred Wilson)

Will the birthday card maiden Aunt Lou sends to Johnny when he’s six years old make a difference when she’s too old to look after herself?

Will the letters she writes him when he goes off to college play a part in whether or not she’s lonely when she reaches her golden years?

Or even possibly keep her out of a rest home?

Approximately 400 Rowan County residents 65 years old and over will be asked 35 pages of questions during the next few months to help two researchers from the University of North Carolina at Greensboro get the answers to these questions and many others involving kinfolk and old age.

Local Interviewers
Mrs. Kivett, an assistant professor in the UNC-G staff, and Learner, a doctoral student and research assistant, were in Salisbury yesterday to train 11 local persons who will serve as interviewers to gather data for their research project, which is aimed at determining patterns of kin group solidarity among older rural and urban adults and could, Mrs. Kivett hopes, lead to changes in government policies involving the elderly.

Rowan was selected for the study using census data and “a formula of sorts,” Mrs. Kivett said, from a number of counties in the state “that represent a rapid transition from a rural non-farm to a more urban area, because of the rate of industrialization taking place.

“We felt it would give us a good environment to look at what is happening to families.”

Rowan Selected
A major factor in its selection, she said, is the “rapidly increasing number of people 65 and over in the county, the percentage of increase in the population of that age within the last five to 10 years.”

Selected areas have been designated in Salisbury, Spencer, East Spencer, and Gold Hill, Providence, Scotch-Irish, Mt. Ulla, Franklin, Locke, China Grove, Kannapolis, and Atwell townships, and they will interview all the people in those ares over 65 who are willing to be interviewed.

Each interview, Mrs. Kivett says, will taken an hour to an hour and a half. Expected to begin early next week, they will probably be completed about December, she said.

Though the present concern is with the relationship of families and age, Mrs. Kivett’s research concerning the elderly has produced some information which has received notice for some time.

She recently directed a study of loneliness among the rural elderly, focusing attention on an area which has been idienfied as among the 12 most serious dilemmas facing people as they age.

The results of such studies, she said, have implications for counselor and ministers working with the elderly and for ways “government can speak to a support system. Are there policies, for example, that can speak better than they are presently?”

If the local study shows that present government polices—financial help through Medicare and Medicaid, for example—force families to put their elderly in rest homes and nursing homes, possible revisions in those polices, which would allow families financial help, might “help families be able to keep their relatives at home.”

And being able to remain home might help ease the problems of loneliness, transportation, even health, which the elderly not only face but also fear.

“Our interest,” Mrs. Kivett said, “comes from the fact that more and more the family is being looked to as the natural support system of old people because of the increasing numbers of people living into old age and the longer time they’re spending in the post-parental period.

“Therefore, the chances of being dependent because of increased age is more of a reality. It become apparent that some system of people, rather than a bureaucratic system, will have to meet the needs of older people.

“So we wanted to take an intense look” at the availability of kinfolk and how far concern reaches. Does it just involve children? Or do grandchildren and nieces and nephews and in-laws also provide financial, emotional, and psychological support for the elderly?

For a long time, Mrs. Kivett says, “even before this movement toward increasing the quality of life came about, I’ve had an intense interest in what older people have to offer society, the resources they have that aren’t being utilized, their needs.

“I think for a while there, in the fifties, sixties, there was so much talk of the nuclear family, of the lack of communication, of interaction between middle aged children and older family member,” but maybe that talk and the studies showing the decline of the family didn’t tell the whole story.

Family Help
Other research, Mrs. Kivett says, indicates there is a “more or less modified extended family and a good bit of exchange of services, still, despite industrialization. There’s a good bit of evidence that children are facilitators to older parents, getting services to them, helping them deal with bureaucratic systems. But I’m not sure how much of this goes on with other relatives.”

Some studies, she said, say that “In our society there tends to be a close relationship with blood kin, but little with those through marriage. We think that’s true, but we want to take a look and see. Who do older people depend on when primary kin are not available? What is available?

“We think we know what things contribute to family ties,” she says, including association (the more contact, the closer the ties), the amount of affection exchanged (birthday cards, presents, letters, the non-essential services), and the concensus of values (the extent that younger and older members value the same things).

“But we don’t know what things combine to affect those factors. We’re going to look to see if traditional factors are important. Telephoning, association, affection. . .how much exchange of non-essential helping behaviors, the niceties, that show someone he’s special, are important.”

How important are common elements of a value system? When a child marries out of a family’s religion or geographical area, is there a drop in family solidarity?

“There is some thinking that families with females have closer ties than families with fewer females, that women are the kinkeepers. This is something we want to look at, too. Does distance affect family solidarity? Does education?

“It gets complex, but that’s what we want to see.”

Because they’re working through a grant from the U.S. Department of Agriculture, Mrs. Kivett and Learner called on the Rowan agricultural extension service for help in getting interviewers and introductions in the area. They have received a great deal of help, particularly from Louise Slade, new home extension agent, and Edith Hinshaw, who officially retires as agent the end of this month.

Family solidarity, she says, is especially important when the resources of the old are diminished, and studies such as the one beginning in Rowan, combine her interest in older people and give her a way to get involved by taking her research to the policy makers.